This week we meet Matt Sadler, of Two Fingers Brewing Co, a social enterprise which donates all profits from its beer sales to Prostate Cancer UK. The company has secured distribution through a number of major supermarkets and excitingly their flagship beer Aurelio has received backing from Jamie Oliver and will be stocked in Jamie’s Italian restaurants throughout November.

Two Fingers Brewing Co. was founded on a simple dream:  imagine you could help mankind, just by drinking beer.

Well, now you can.  Two Fingers Brewing Co. is the only beer brand that gives back to the men that drink it, by giving all profits to Prostate Cancer UK.  We handpick the finest ingredients to create beer that’s not just better tasting, but better for men everywhere.

Aurelio, our flagship beer, is a refreshing, clean and crisp golden ale, available from retailers across the UK including Morrisons, Tesco and Ocado plus bars and restaurants including the Michelin-starred Club Gascon and – especially for November 2014 – Jamie’s Italian (see video!).

The reason we’re doing this is that 1 in 8 British men, rising to 1 in 4 black men, will get prostate cancer – and it kills as many men as breast cancer does women – yet support & awareness for it is far less.  So, we’re making joining the fight against the most common male cancer as easy and enjoyable as reaching for the bottle opener.

This is one small sip for man, one giant leap for mankind. 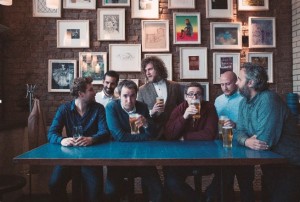 Two Fingers Brewing Co. was founded in 2012, when several colleagues at the advertising agency where we (still) work had been affected by prostate cancer and we learned that the chances of us getting it are shockingly high.  So, the seven of us decided to combine our expertise in building brands and our passion for craft beer to launch the only beer brand in the world that puts men’s health before profit margins, by using all its profits to fight prostate cancer.  Basically, we were too lazy to run the marathon, so we launched a beer brand.

Our mission is to fight prostate cancer, one beer at a time.  So, we donate all of the profit we make from selling our beer to Prostate Cancer UK – with a guaranteed minimum of 10p per bottle.

Like everyone, we’ve got bills and tax to pay, and we need to reinvest to grow, but our awesome suppliers and retailers all help by giving us favourable rates.  Incredibly, all of them work with us at, near or below cost, in support of the cause.

Our social enterprise took two years to take from initial idea to public launch.  The hardest part was making the step up from selling in small numbers to family and friends at the end of year one, to selling thousands of bottles at a time to national retailers after year two.  We had no idea where to start building a supply chain, let alone whether we’d be able to set up a commercially viable operation, or how the retailers would react.  Thankfully, however, we were lucky enough to get some expert advice and support from beer industry professionals – who loved the idea – who pointed us in the right direction.  Each person we met introduced us to others and it was their passion and enthusiasm for our mission that kept us going in the face of uncertainty and doubt.

I’m really proud that we’d won not just one, but two awards, just 9 months after launching to the public:  Best Craft Beer Innovation at the International Beer Awards in Rome, in May, and the Contribution to the Community award in the Nectar Small Business Awards, in September. 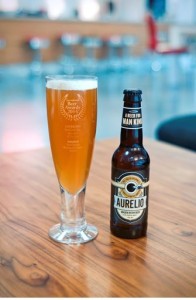 I describe myself as a professional juggler – with my day job in one hand, Two Fingers Brewing Co. in the other and my family and friends flying through the air.

So, I’d encourage anyone who’s setting up a social enterprise to remember what your customers really want.  Since day one, we’ve told ourselves:  no one wants a bad beer, no matter how much good it does.  So, our recipe for success has been to focus on brewing delicious, top quality craft beer, then adding a unique charity halo on top.

Gather the world’s leaders together and tackle our challenges in the best way possible: over a beer.

You can find out more, including where to find your local stockists, at twofingersbrewing.co/