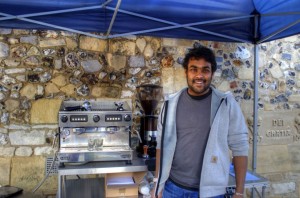 For a number of years now in addition to my day job I have regularly been involved in bits of voluntary work.  In one role I look after a regular list of speakers who go into a treatment centre in Portsmouth to talk about their experiences living in recovery after treatment. In another I’m involved in a similar voluntary commitment working with younger lads at Feltham Young Offenders, who have been affected by drugs and alcohol.

As somebody who also doesn’t drink, I’ve always felt that there is a lack of places to go at night that have a good social atmosphere and are alcohol free – this appears to be the case in most cities, not just Portsmouth where I live.

The idea I’m working on – which has been influenced by these voluntary and personal experiences – is around creating more great places to go at night that are alcohol free and offer an alternative to going to the pub. Through the venture we aim to help those affected by drugs and alcohol to develop skills and confidence. I was able to work on my idea with many perspectives floating in my mind. This was due to the inspiring help from articles like, www.werecover.com/blog/alcohol-recovery-timeline-how-long-will-it-take/. It helped me to read about others and their tribulations with alcohol, this gave me more and more motivation to get this going. It was clear to me that alcohol free socializing was deeply needed in all major cities around the world, but I would start by focusing on my own city.

Around 14 months ago I started to put pen to paper and get down some ideas I had around creating more alcohol free places to go at night in Portsmouth. This was around the time that the deadline was looming for the 2013/14 Fellowship course and I figured I would apply with the view that:

Best case scenario:  I secure a place on the Fellowship course.

Worst case scenario:  I would have all these thoughts and ideas that had been kicking around my head down onto paper.

I applied to the SSE because I knew I had a great idea and from my personal and professional life experiences, I had the ability to make my vision into a reality – I just didn’t quite know how to do this i.e. how to get from A to B – and I suspected that the SSE would be able to help.

Being on the Fellowship Programme has forced me to prioritise and commit to my project.  I am quite sure I would not have made the progress I have made this year had I not have been at the SSE.  Where our time at the SSE is time boxed (lasting roughly 9 months) – it has very much felt like ‘now or never’.

We are still very much at the early stages of this venture but the project is progressing;

The project now has more manpower since I took a leap of faith and left my corporate day job and I have also engaged a business partner, James, who has a lot of experience in food (which I don’t have).

James and I have been running a series of focus groups with a sample of our customer base and doing a lot of research. I have also completed training with City & Guilds in Barista Skills and purchased a coffee machine.

We wanted to end the year on a high and do something fun so we decided – that as we now have a coffee machine – we would give 500 cups of coffee away for Christmas to raise some awareness, trial popping up, but also have some fun.

Doing this before Christmas was such a great learning experience but unfortunately on day 3 the winter weather did get the better of us so we’ll be giving the remainder of cups away in early 2014. 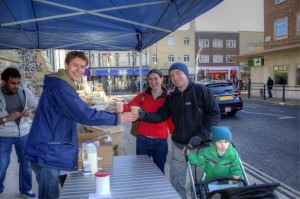 James handing out coffee during #500cups

What the future holds

After trying the #500cups exercise we are now also considering doing festivals and other potential pop-up events in 2014 to generate revenue and get experience.

The longer-term plan is to open up a late night café/bar establishment that’s open 7 days a week until late. We’ve certainly been influenced by places like Paper and Cup in Shoreditch and The Brink in Liverpool, although how this will look in reality is something we’re thinking about a lot.

Our pop-ups in 2014 are very much part of the journey to getting there and will allow us to experiment, trial some of our concept, gain experience and develop a track record in a low risk way. 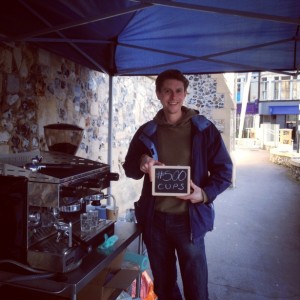 James at #500cups giveaway in Portsmouth

This blog is by Pravin Isram who is a student at SSE London.