SSE Fellow Melanie Glass has just celebrated the first anniversary of her business Devenishgirl Bakery operating as a social enterprise and to mark the event is writing a series of articles covering her journey; from taking the leap of faith to start a social enterprise, to the impact their work makes, how to dream bigger and several other themes. 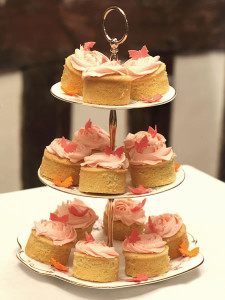 Eighteen months ago I reached a crossroads in my professional career: I’d been working for a national youth charity for 11 years and, for the last three, had been helping set up social enterprises as a means of developing our trading arm. One of the social enterprises – Devenishgirl bakery – allowed me to combine my passion for baking with my skills as a community educator, thus delivering pre-employability and social enterprise start-up programmes to marginalised young people whilst teaching them to bake within a community kitchen. But I was unsettled and, for quite a few months, began to think about what I could do if I left the charity. And then one of the Directors suggested that I should think about setting up Devenishgirl bakery as my own business.

Over the next several months – and a holiday in Cyprus – I came to the decision that I needed to take a leap of faith and set up my own business. For those involved in that process they know how painful that time was – the fears, the doubt, the uncertainty and, at times, blind panic. But, once I made the decision, I immediately felt a sense of relief and excitement. Yes, I would miss working for the charity, but this was the right time. That was the inspiration – I think of it as permission – to take the leap of faith and decide to step out from the charity and set up my own business that would trade as a social enterprise.

As I look back to that time I recognise that fear, inspiration, my maverick nature and Northern Irish determination played a part.

Fear was a major player in my decision to leap when I did – fear of not achieving what I thought I was capable of professionally; of always wondering ‘what would have happened if’ I set up my own business?’ – but didn’t; of stagnating and settling for a job that provided me a salary rather than pushing me to learn, grow and change; and fear of never knowing what it would be like to set up and develop a social enterprise providing a positive environment for marginalised young people to develop and flourish.

Over the past few years I have had the privilege of working, and meeting, with some amazing women who have challenged, encouraged and inspired me to become more of the person I want to be. Part of that challenge was also recognising that, if I wasn’t careful, I would simply continue to see them as an inspiration without allowing that inspiration to turn into action. And so, through being inspired by them I became inspired to leap…

Life as a Maverick

Being a maverick has its good points – and bad. But I have realised more and more that if I don’t listen to my inner maverick I stagnate, become restless and rather grumpy! And, in the months before I made the decision to set up in business, my inner maverick was screaming at me – but I was trying to ignore it! But, over time, I begin to dream and wonder what it would be like to take Devenishgirl bakery as it was and turn it into a social enterprise. Gradually the restlessness turned into belief and, that in turn, helped me come to the decision. My inner maverick was now in full ‘let’s set up a business’ mode and the dreaming began.

Take growing up in Northern Ireland with a family of brothers, add in 6 years of life as an Officer in the RAF, too many experiences of being told I wouldn’t achieve what I wanted because I was a woman and allow to develop over the years into a recipe for determination. Then turn that determination into dreams of creating a social enterprise that would not only enable me to utilise my skills and passions but would also enable to achieve social change through the programmes and opportunities I could offer to marginalised young people. The result? Taking a leap of faith to set up a business in 2014.

On the 13th February 2014, Devenishgirl bakery officially became a Community Interest Company and I became the Founder and Owner of my own business. It hasn’t been easy but, looking back, I am so glad I took that leap of faith and am now about to start our second year of trading. Fear, inspiration, my inner maverick and determination will keep me going!!

One thought on “From charity worker to social entrepreneur: the leap of faith”