It was deliberately a mystery, almost a secret : it produced strong feelings, frustration and fun; it was  very different from what we usually do in a two day learning block at SSE and some sparky ideas came out of it.

It was the Apprentice Challenge, part of the London Fellowship course each year.

I’m a volunteer at SSE and my assignment last week was to work with one of the three groups into which the students were split, as a facilitator of the process. I’d done it before and it’s different each time.

What happens?  At 10.30 last Wednesday students were given instructions:

Your task is to present an inspiring proposal for a brand new social enterprise that addresses inequalities in the London Borough of Southwark.  You will be working in teams, each group can determine the nature of its enterprise, but you must make sure that it’s got clear local talent. You’ve got 10 hours to work together, including four 30 minute sessions with experts in marketing, finance, social impact and sustainability and at 2.30 pm on Thursday you must be ready with a stall demonstrating your idea and a 6 minute presentation to make to a panel of judges, consisting of representatives from SSE and SSE’s corporate partners in the Fellowship programme: Pwc, Linklaters and RSA.  The teams were told that they had to demonstrate the idea they come up with in an at a glance presentation, sketch out a plan of how to get it to market successfully, set out three years’ financials, demonstrate the idea’s sustainability and how that fit with the financial plan and their method of ensuring maximum social impact.

Does it sound like a lot?  Well, it was.  And all the above although absolutely required was only the pretext for the two days.  In fact what SSE was doing was simulating a situation in a safe place but with lots of pressure, in which the students had to work in teams.  Doing that isn’t always easy fro people with strong ideas, strong leadership personalities and absolute determination.  The Apprentice Challenge is in fact a hard knocks assault course in co-operating, acceding  power, standing back, planning together and everything else that’s part of working in a successful team.

By 4.00pm on Thursday the three teams had presented 3 great ideas:  an alternative employment exchange; a hub for lone parents to share experiences and skills and a  doughnut making companys to train unemployed Southwark residents in catering and cooking skills. 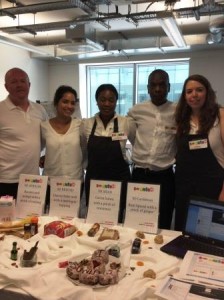 I saw these three very different ideas emerge at the end and from the perspective of working closely with one group was part of the hurly burly the group went through, brainstorming, finding experts in addition to the four who were provided by SSE, testing ideas and heartbreakingly finding some wouldn’t work, recovering from the slump of dismay, clashing, co-operating, leaving the room, spending time in the chill out room specially set aside for that, delegating, disagreeing and coming together. The people in the team I was with told me that there had been points when they thought the task was impossible and others when they were elated by what they had been able to achieve. They said they knew each other a lot better at the end and also that they’d learnt surprising things about themselves.  They questioned their ability to step forward and  stand back.. They wondered were they too quiet, too dominating, too controlling, too apparently uninvolved? They were surprised by the passion they felt for the enterprise as they crafted it and their ability to sell their idea to the people they tested it on.  They said it had been an amazing two days. It was for me too.

There will be other students and facilitators whose experience was different and I have no inkling why that is.  Some students may have gone through the 2 days treating it as a necessary and not very interesting task. Others may have found it daunting, frustrating and a waste of time.  All I know is that several students told me that they found it very hard and  the students  in the group I  happened to work with found it a formative experience. A student from another group wrote later to say that it had been immensely frustrating and that he’d learnt a lot.  Perhaps the students who hated it  – I think there were some – will respond to this blog.  I hope so.   We want the exercise to bring out strong feelings so that the people taking part can learn from them.  As one student said: “Put together a group of people with strong ideas who are used to running their own enterprises the way they want to and there’s bound to be trouble. It’s herding cats.” And it would have made great TV.