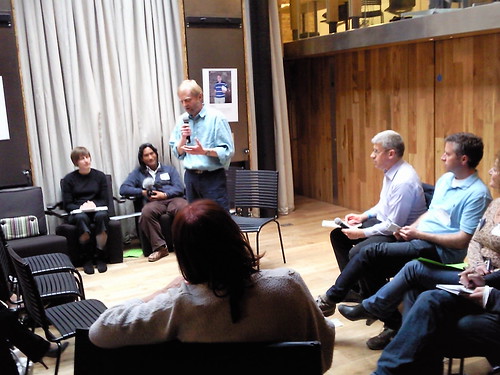 Just wanted to capture some quick reflections on the two days of Shine 09. Am sure there will be more over the next few days, + more photos and videos to be uploaded.
Overall, as one of the co-founders and organisers (SSE), I'm pretty delighted with how it went. Massive congrats and thanks to Sam, Lizzie and all at Germination for all their hard work in making the event a reality, and one that ran pretty smoothly. And all on a shoestring budget.

The four partners started the event because they felt there was a need for an accessible, affordable, practical, well-networked, dynamic event that was less about long powerpoints and plenary speeches, and more about one-to-one support and moving your business on. I really think Shine 09 delivered on that concept, and, overall, it felt like more 'business' was being done at the event than last year. Or, as Cliff Prior (UnLtd CEO) summarised to me, Shine 08 was about inspiration, Shine 09 was about perspiration…or about implementation. I saw a couple of SSE Fellows walking out at the end of Friday and they were listing the work they'd got, the contacts made, and the practical advice they'd received…which was very much music to my ears.

Highlights for me on the Friday were the 1:1 areas, where organisations like Lovells, Futurebuilders, UnLtd, Ashoka and ourselves got little respite from social entrepreneurs thirsty for advice and information. Some of the workshop sessions were a little more mixed, going on anecdotal feedback, but I heard positive things about the Mind MOT session and Jackie Westlake's DCLG session(s) in particular.

On Saturday, the vibe was relaxed and enjoyable, and What If gave a load of bespoke consultancy to those who were there (and booked in). The Social Collaboration game was great, and its hypothetical MP expenses endowment fund almost became a Twitter hoax, before being stopped in its tracks. Finally, the pitching session was great, with four excellent projects, and the judging panel giving supportive and constructive feedback (though I say so myself). Martin Sherrard won the popular vote, and an UnLtd Level 1 Award, for his walled kitchen garden project.

As ever, we will learn from this year and the things that went well and that didn't. The balance between structured and unstructured felt good this year, and the Kings Place and the Hub Kings Cross were stellar venues. The only challenge with Kings Place was the split levels (which meant it felt slightly less of "one event" together) and lack of natural light in the downstairs rooms, but it's a great and well-resourced place to have an event. The Hub has a great vibe and, as at Kings Place, the staff and team there could not have been more helpful and accommodating.

Final big thanks to all who made it possible: Germination as I mentioned above, the funders and sponsors (Lovells, Futurebuilders, CCLA, DCLG, OTS et al), the media partners, the founding partners (especially [email protected], [email protected], Cliff and [email protected]), all the volunteer UnConsultants and helpers, David Wilcox for this site, and to all the social reporters and twitterers who helped make the event one that others could be involved in even from miles away.

Till next year then… ;0) and check out the Shine Social Reporter site for all the posts, videos, tweets from this weekend.