The School for Social Entrepreneurs began with a man called Michael Young. Michael was a serial social entrepreneur, author and sociologist.

Michael realised that he could multiply his impact by equipping the next generation of social entrepreneurs to start and grow organisations that make a positive difference in the world.

In 1997, Michael brought together a group of 24 people who wanted to learn from him. This first School for Social Entrepreneurs cohort ran from Bethnal Green in East London. It included our current CEO, Ali Wilson – see if you can spot him below!

Ali keeps us true to Michael’s vision, while evolving SSE’s work across the UK and internationally for positive change. 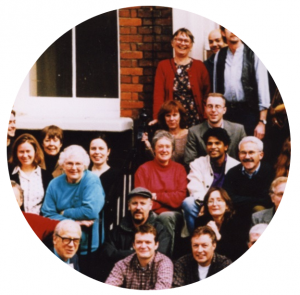 More about our founder, Michael Young

Michael is recognised as one of the world’s most creative and influential social innovators. In 1945 he wrote the Labour Party manifesto which ushered Clement Attlee’s government into power. Michael played a key role in shaping the post-war welfare state.

In 1957 he wrote The Rise of Meritocracy, in which he coined the phrase ‘meritocracy’ and critiqued previous governments’ restrictive view of merit. It sold 500,000 copies in 12 languages, helped to abolish the 11-plus examination, and pushed the Left to champion equal opportunities.

In 1954, Michael set up the Institute of Community Studies (now ‘The Young Foundation’). The ICS fostered more than 60 organisations and initiatives focused on meeting social needs. NHS Direct, the Open University, and Which? Consumers’ Association were all born from the ICS.

Michael founded the School for Social Entrepreneurs to create opportunities for people like him who wanted to make positive social changes. He passionately believed that entrepreneurship should be learned through practical experience.

In later life, he was appointed to the House of Lords. Lord Young of Dartington died aged 86 in 2002.

His ideas about learning are still the beating heart of the SSE.