Social entrepreneur fights back at racism by launching ‘Love T-Shirts’ and #EradicateRacism campaign. 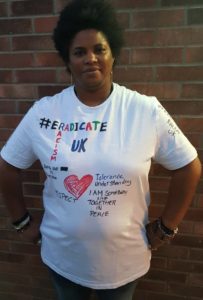 SSE fellow and Essex mum Juliet Ryan has launched a campaign to tackle racism in schools after an unprovoked attack on her 15-year old son in a school in Essex. Juliet and her son have received extensive coverage in the media, and family now want to build upon the outrage expressed in the media to eradicate racism completely.

The ‘Eradicate Racism’ campaign aims to turn racism in schools on its head by asking everyone, from students to celebrities, black, white and everything in between, to grab a pen and write messages of love and appreciation on a ‘Love T-shirt’, as opposed to the hurtful slogans and derogatory remarks characterised by racism.

Juliet Ryan, whose son was racially abused at his school, explained how the attack left him unable to leave the house. She said, “Like many students, my son, who is a pupil at Clacton County High School, took part in the traditional shirt signing on his last day of school. However, instead of a celebration marking the culmination of his school career, he was shocked to realise his fellow students had written the words, ‘ni**er’, ‘c**n’ and ‘go back to the jungle’, on the back of his shirt.”

However, the family are refusing to let racism have the last word, and have launched the ‘Eradicate Racism’ campaign to promote love, respect and understanding. They said, “We want to live in a world where difference is appreciated, education undoes the misconceptions and stereotypes of prejudice, and racial bias, whether unconscious or conscious, is a thing of the past”.

Juliet, herself a victim of racist abuse, concluded, “We want to quash the negativity and damage done by the comments written on our son’s school shirt, and create something positive! We would like everyone from sports stars and music artists, to mums and dads, and brothers and sisters, to grab a pen and combat hate by creating a ‘Love T-shirt’.”

In the days following the incident in June, Juliet has appeared on ITV’s This Morning Britain, Sky News’ Breakfast Show and BBC Essex, and has been featured extensively in both the national and local press. Messages of support have been received from many in the local community including Conservative MP for Clacton, Giles Watling. Send Racism The Red Card, the UK’s leading anti-racism education charity is also backing the campaign.

Join the fight to #EradicateRacism 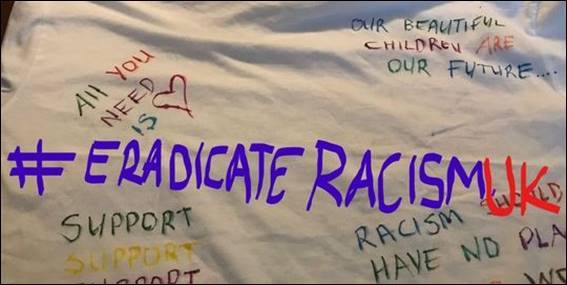